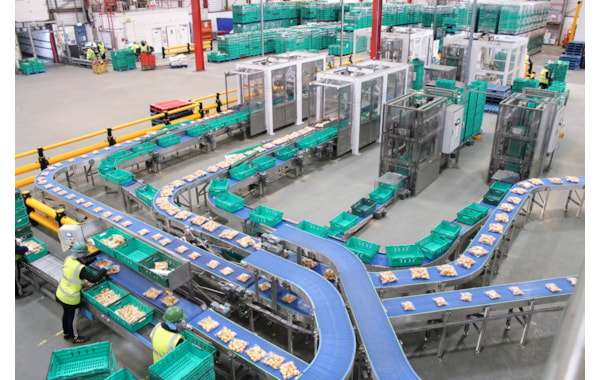 In the past 18-months, Brillopak has installed a range of fully automated pick and place packing lines at three of Morrisons’ fresh produce and fruit manufacturing sites, most notably the Rushden packhouse which cleans, stores, packs and distributes thousands of tonnes of potatoes every year.

Jason Kelly, Head of Operations for Morrisons Manufacturing has led the automation strategy across its fresh produce business, which includes the recent Brillopak systems installed at Rushden, Thrapston and Gadbrook. He said all three sites are delivering improved in-store presentation for potatoes, apples and other root vegetables. The turnkey systems can be easily adapted to handle reusable and renewable packaging formats.

“Gentle handling is essential to prevent damage and costly waste. Equally important is the need to retain product freshness.” said Jason, adding: “Rushden was the third multi-line implementation where Morrisons worked with Brillopak. Rather than creating individual autonomous operating units, we sought an integrated, comprehensive, more labour efficient system that covered everything from packing produce to palletising. Brillopak’s modular automated concepts have proven to be extremely flexible and reliable, accommodating variations in speeds and packaging formats. The true measure though has been the almost immediate improvements to operational efficiency effectiveness (OEE).”

Forming part of a company-wide investment in front and back end manufacturing improvements, Rushden has significantly boosted its OEE within 12 months, reports Andy. Yet, most importantly for the site manager, the way potatoes are presented in crates has dramatically improved. Additionally, waste is down, bottlenecks have been virtually eliminated, reliance on agency staff has reduced and workforce wellbeing and satisfaction is the best it has ever been.

The Brillopak packing systems needed to boost the pick and place line speed. Rather than commission a ready-made robotic system, the Rushden team worked collaboratively with Brillopak to engineer a new pick and pack concept. Unlike other depots that wash, grade, pack, palletise and send out in the same day, Rushden has a separate wash, store, pack and case loading area. Because there’s more fresh produce being processed and stored, space at Rushden is at a premium.

Andy said: “Designing a system that would accommodate our facilities tight footprint was the biggest challenge. Yet, having worked with Brillopak on Thrapston’s apple packing line, I felt confident that they could prove their concept and invent a modular automated system that we could introduce in phases causing minimal disruption to our seven-day-a-week processing and warehouse operation.”

Comprising two long stretches of conveyor feeding bagged potatoes from the manufacturing and bagging operations, each automated line features eight Brillopak elements. At the start of the line a crate destacker unit lifts and feeds Morrisons’ retail trays at a consistent speed and continuous stream on conveyors to the dexterous P180 spider arm robotic cell. Snaking alongside are the product conveyors. Rumble technology is fitted to a small section on each conveyor to help settle the packs as the feed single file into each P180 Spider Arm Unipick Dual Robot Cell.

Rather than using gripper end effectors that would pierce the potato bags, Brillopak designed a glove-like end effector that wraps around each potato pack robot arm lowering rapidly yet gently into trays at very high speeds.

Filled trays then pass over a vibration panel to settle the potato packs in the crates. This ensures packs don’t get caught when the bale arms close. If the bale arm is damaged, the crate is rejected and the potatoes are returned to the start of the packing process for reprocessing.

The filled crates of potatoes then pass to a double crate stacker, which places one loaded crate on top of the other. From here the double stack is presented to the integrated yet compact palletiser. For maximum efficiency, Brillopak’s compact palletiser accommodates two pallet stacks side-by-side. When one stack is full the cell door slides open and the full pallet is removed. To protect workforce Health & Safety, only when the cell door closes, does palletising on the remaining empty pallet resume.

The difference having an automated packing line has made to the presentation of fresh produce packs cannot be underplayed reports Andy. “Product accumulations and the speed in which potato packs were delivered onto the rotary turntable previously resulted in irregular orientations,” he said. The consequence was frequent production stops and starts, and messy trays with packs being placed into trays in different angles and patterns. “Regaining control over the orientation without stopping the line was near impossible once the packing pattern was lost,” adds Andy.

To resolve this, the company installed two four-axis Delta type robots side-by-side within the two P180 Unipick pick and place systems. Capable of orientating packs quicker than any human being, the robot arms don’t miss a beat exclaims Andy.  “They just keep going, loading with dexterity, tilting and placing potato packs individually at speeds that even a layer packing robot couldn’t contend with. It’s an extremely clever piece of kit,” he says.

On the manual packing stations, Andy had an equally clear objective – to get rid of the un-ergonomic turntable packing system. Citing that it wasn’t the right solution for the potato packs or people, Rushden implemented an inline system.  Andy describes as a hybrid design as it borrows elements from the five Brillopak Packstations installed at Thrapston’s apple packing depot.

Andy explains: “Physically fitting more people around the turntable to pack faster was unfeasible. Space just wouldn’t allow it. When creating our two Brillopak C130 Semi-Automated Packstations we combined the best of Thrapston’s design and integrated several bespoke specifications.  Our site’s modified design guarantees pack orientation to our colleagues on the manual line. Rather than clusters, packs come through in single file. This helps to guarantee consistent presentation of packs within the trays.”

In addition, the design of the C130 lines helps to mitigate repetitive strain injuries and makes the whole manual packing process seamless. “Our colleagues find it much more ergonomic,” states Andy. “They’re not bending over or moving around the turntable or lifting trays for lengthy durations. This rotation around different tasks, combined with less reliance on agency staff, has created a much stronger team ethic,” he highlights.

With one multi-skilled person managing both automated P180 lines, as well as pulling away the pallets, Rushden has reduced its packing headcount.

Brillopak’s modular design also means that Morrisons has a future proof investment. “Rushden currently has four packing lines handling between 13 and 14 SKUs. If volume of products or capacity demands it, we can converge all four lines and run through the robotic cells. The ability to swap, chop and change or drop in new kit knowing that with one supplier it will work seamlessly alleviates a lot of pressure,” adds Andy. This benefit also extends to sourcing critical spares, which in turn reduces stock holding.

“It becomes much easier to manage an automation project when you know exactly who to go to when a problem needs to be fixed,” said Andy. Currently, Brillopak is assisting Rushden with a rumble conveyor to stress test the pack seals before they enter the packing warehouse. The end goal is to keep as much rework as possible in the room where it can be repacked, rather than downstream.

To minimise production disruption, Brillopak built, tested and installed Rushden’s machines in phases. Most of the really disruptive work was done at night, out-of-hours.

Stickers urge buyers not to be deterred by appearance

We use cookies to improve your experience of this website by remembering your usage preferences, collecting statistics, and targeting relevant content. If you continue to use this site we’ll assume you’re happy to receive all cookies.

We use cookies to improve your experience of this website by remembering your usage preferences, collecting statistics, and targeting relevant content. If you continue to use this site we’ll assume you’re happy to receive all cookies.